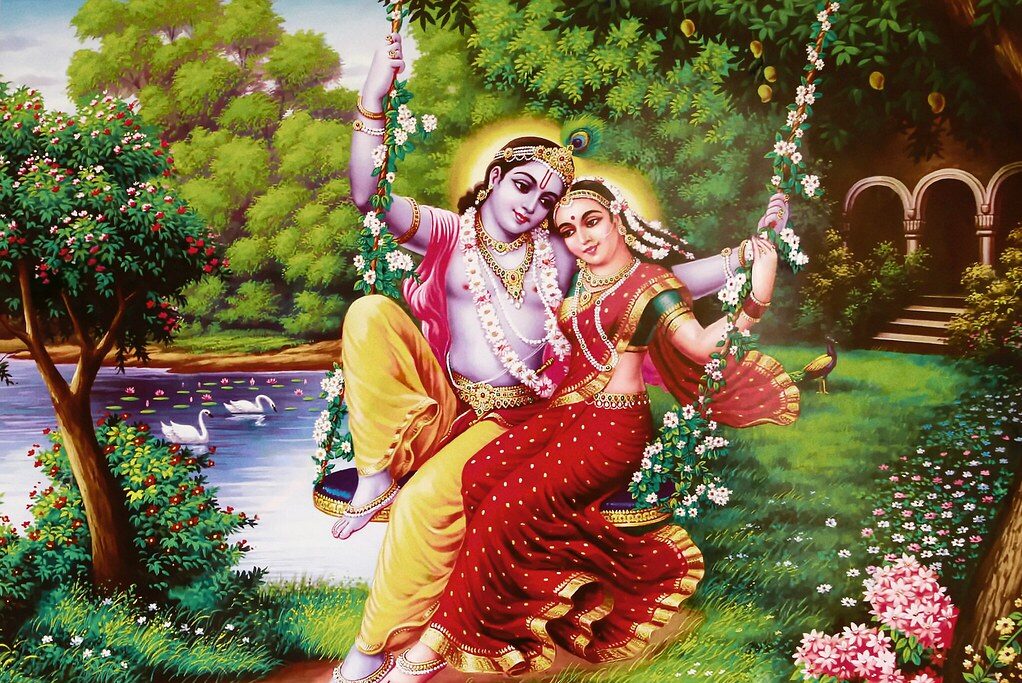 One of Hinduism’s most widely celebrated holidays, Janmashtami is especially important to followers of Gaudiya Vaishnavism — a tradition in which Krishna is considered to be both the source and ultimate form of the Divine and is worshipped through the process of bhakti yoga (yoga of loving devotion). Other Hindu traditions view Krishna as an avatar of Vishnu.

According to the Srimad Bhagavatam, a sacred text detailing the pastimes of Krishna, the story of his appearance begins when Bhumi, the presiding Goddess of the Earth, approached Brahma, known as the Architect of the Universe, for help.

Distressed, Bhumi told Brahma the earth had become overrun by malevolent kings who were subjugating the people and ruling through greed, and was thus in a calamitous position. Feeling compassion, Brahma went to Vishnu — a form of the Divine known as the Preserver and Protector of the Universe by many Hindus, and considered an expansion of Krishna by Gaudiya Vaishnava Hindus.

Hearing Brahma’s prayer, Vishnu said he, in the form of Krishna, would soon take birth on the earth for the specific purpose of eradicating corrupt monarchies, protecting the oppressed, and establishing favorable leadership.

During that time, one such malevolent king, Kamsa, heard the prophecy that the eighth child of his sister, Devaki, and her husband, Vasudeva, would kill him.

Wanting to prevent the event from occurring, Kamsa threw his sister and her husband in jail in his kingdom’s capital, Mathura (a city by the same name is in India’s northern state of Uttar Pradesh).

While in prison, Kamsa killed every child Devaki bore. Though he knew it was only the eighth child who was destined to kill him, Kamsa had become paranoid and thought it safest to simply kill every infant his sister had.

As the prophecy would have it, Krishna was Devaki’s eighth child and shortly after he was born, all of the prison doors were mystically opened and the guards fell into a deep sleep.

Taking the opportunity, Vasudeva snuck out of imprisonment and carried the baby to the village of Vrindavan (also a city by the same name in India’s northern state of Uttar Pradesh), where he left him to be raised by a couple by the name of Yasoda and Nanda, who became known as Krishna’s adopted parents.

After spending his childhood in Vrindavan, Krishna returned to his birth city of Mathura and killed Kamsa, ending his tyrannic rule and re-establishing dharma, or righteousness.

As Vishnu promised, Krishna eventually became a king of his own city and spent his time ridding the world of its oppressive powers, and replacing them with altruistic and magnanimous leaders.

Krishna is also well known for the wisdom relayed in the Bhagavad Gita, one of Hinduism’s most revered philosophical texts, which expounds on the nature of the Divine, the individual, the physical world, and their relationships and responsibilities to one another.

As told in Gaudiya Vaishnava texts, though Krishna left and took on the responsibilities of a king in his adulthood, he always considered Vrindavan to be his cherished home. In Vrindavan he was a simple cowherd boy, loved deeply by his family and friends.

Because of this, though all of Krishna’s forms are worshipable, his form as a cowherd boy is given special emphasis and Janmashtami is celebrated with particular pomp and splendor in Vrindavan.

Home to more than 4,000 thousand temples, today Vrindavan becomes abuzz with the chimes of bells and the singing of kirtan (devotional music), as festivities begin 10 days prior to Krishna’s actual birthday. Priests assemble and conduct public readings from the Bhagavad Gita, while pilgrims from all over the world make their way into town.

In addition to kirtan and public scriptural readings and discussions, dances and dramas enacting the life of Krishna are performed on Janmashtami day.

The murti of Krishna is given abhisheka, an auspicious ceremony in which the public gets to see the deities as they are ritually bathed by temple priests.

On the day prior to the time of Krishna’s birth at midnight, many devotees fast —  a practice that helps one to cultivate control over the senses, which can then be better focused on worshipping Krishna and meditating on his pastimes.

Though midnight is typically considered the start of a new day in modern times, ancient India considered the new day to begin at around dawn, which is why Janmashtami is observed on the day leading up to Krishna’s birthday..

When midnight finally arrives, Krishna’s birth is celebrated with an ecstatic kirtan in the temple.

Afterwards, devotees break their fast with prasada (sacred food offerings considered blessed by the Divine), before eventually returning home to retire after a long day of festivities.

Some, however, remain and do kirtan even deeper into the night.

As Janmashtami only happens once a year, many followers see every moment of the day as so auspicious, every second should be taken advantage of to remember the glories and lessons of Krishna.