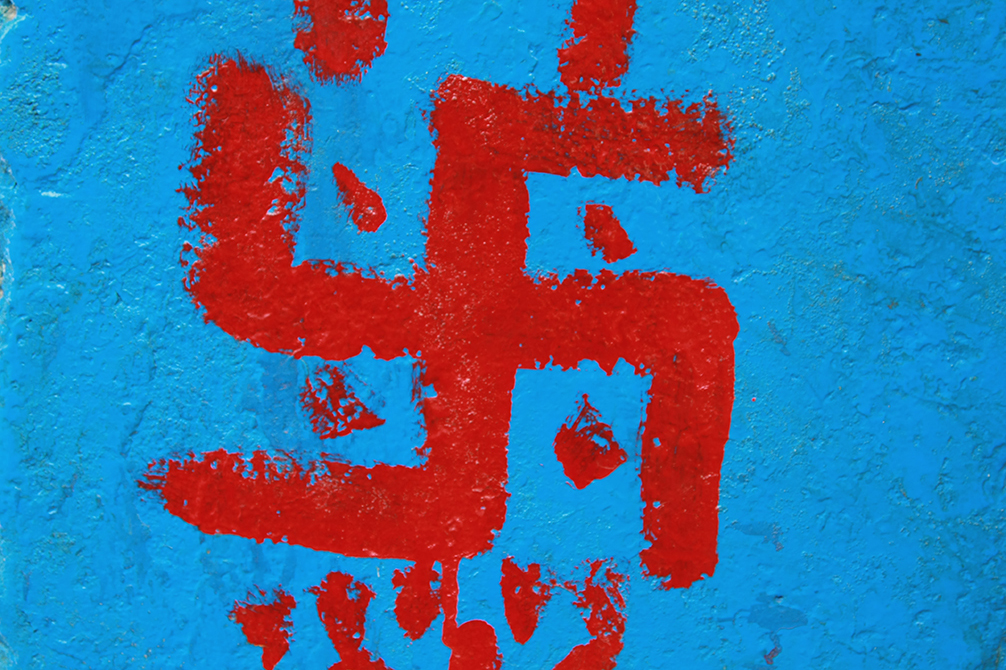 “Can the swastika ever be redeemed?,” Kimberly Winston asks in a recent article for Religion News Service. Given the rise in hate crimes and anti-Semitic graffiti in recent months, as bigots of multiple varieties in the United States have become emboldened by the campaign and election of Donald Trump to the presidency, it’s a good question to ask.

Part of answering this question and in redeeming the swastika in the hearts and minds of the West is recognizing that for the billion-plus Hindus, Buddhists, Jains and others who to this day use the swastika in its traditional capacity as a symbol of good luck and auspiciousness, there is no redemption necessary for this sacred symbol.

We never stopped using the swastika because of its use by the Nazis and its anti-Semitic associations in Europe and the Americas over the past century. We have continued to use the swastika with pride. We’ve consistently pointed out that there’s a visual difference and difference in intent between the hateful usage and our usage. In places where Hindus and Buddhists are the majority population, it sometimes seems like you can’t turn around without seeing a swastika. Its usage for us is as natural as breathing.

When I see our swastika used traditionally all I see is joy and love. When I see a swastika scrawled on the walls of a subway car or in a public park in New York City, where I live, I feel sadness — sadness that such hatred has been freed by political circumstances and sadness that such plain ignorance about the swastika’s history and traditional use is so commonplace here. These are not inconsistent emotions. For me it is easy to recognize the difference between these similar but crucially different symbols. It is simple cultural literacy to be able to recognize this.

Winston does a good job of outlining the history of the swastika in her article, but it bears repeating.

Positive use of the swastika far outnumbers the hateful

The swastika is one humanity’s oldest and most consistently used symbols, across nearly every human culture. The oldest instances of its use that archeologists have discovered go back to not long after the last ice age in Ukraine. It has been used consistently in the Indian Subcontinent for several thousand years. Ditto East Asia. Pre-Christian cultures used it in Europe for a similarly long time period. Recognizable swastika-like symbols have been used in Africa and North America as well. In Europe and North America the swastika was used as a symbol of good luck right up until World War Two and had been experiencing a resurgence for several decades prior to this. All told, the swastika has more than 10,000 years of positive associations behind it, continuing actively to this day, with more than a billion people continuing this tradition. The hateful use of the symbol by the Nazis has less than a hundred years of history behind it, with less than two decades of official usage by a nation of less than 100 million people at the time. Today it is hard to determine how many people ascribe to this hateful ideology and worldview. If registered users at one of the most prominent white nationalist websites is any indication, the numbers are not great compared to either people using the swastika with its traditional intent or the general population in the West.

The answer can only be no.

The only qualification to that ‘no’ is how best to consistently educate people about the traditional usage of the swastika. This will be a tough task, with wounds from the Holocaust still unhealed. But we must rise to the challenge.

This is how we can reclaim the swastika

Every time an article is written about someone using a swastika for hate the author has a duty to point out that this use is a shameful aberration in the long history of the swastika. This needn’t be the focus of the article, but it needs to be there every single time. In the same way, whenever public statements are made condemning such hate, a quick, sensitive statement recognizing the traditional usage needs to be made, every single time. To not include this information is to perpetuate an ignorance that only furthers and gives power to fear and hate.

We Hindus, Buddhists, and Jains must become ambassadors for the swastika, educating ourselves about our tradition so that we can educate others about how we use the swastika. And we must be vocal about it, while also being sensitive to when and how we speak up.

We also mustn’t shy away from using the swastika in the West in our traditional ways. If we are challenged in doing this, we must be willing to engage constructively and in an educational way. Most of the time, opposition to traditional swastikas is likely done out of reactive ignorance. We must help remove this ignorance. These conversations will be difficult at first but they must be had.

We must also flood the public consciousness with our auspicious symbol, pushing away the bigoted one. In a similar way that the pink triangle, once a symbol of oppression, is now a symbol of pride, the swastika may again be universally seen as a symbol of good fortune and well-wishing.

On the political level we must pass resolutions acknowledging the long history of the swastika and its non-hateful usage. Several years ago at the second Hindu-Jewish Leadership summit, such a resolution was passed. We need to do this in the United States and in every other nation—particularly in nations that have had a strong history of anti-Semitism. Perhaps a day of swastika awareness, even if only done at the city or state level at first, would be effective.

In doing these things we can send a clear message to the Nazis, the anti-Semites, the white supremacists, fascists, and other spreaders of hate, that we Hindus, we Buddhists, we Jains, we pagans, we Native Americans and others, all of us who have used the swastika as a symbol of prosperity, auspiciousness and goodwill for millennia, we are taking back the symbol you stole from us.