In Stereotypes and Bias, Congresswoman Bachmann Not Alone

While I called Minnesota home for the past six years, weather extremes, countless lakes carved out from the last glacial period, and a fanatic sports scene dominated by the baseball Twins and football Vikings was expected.  And though I should have known better–the state did elect a heavyweight wrestler-turned lightweight politician as governor–what I did not expect were the extremes in the political sports scene.

So while most Minnesotans may identify with the sober, understated politics of the state’s immediate past governor, and possible veep-in-waiting, Tim Pawlenty, Rep. Michele Bachmann (R-MN) is the antithesis of sober or understated and a walking billboard of Tea-Party ideology.  And in a state that gave forth erstwhile politicians with the class and gravitas of a Hubert Humphrey or Eugene McCarthy, or ebullient inspiration of a Paul Wellstone, we now see how far that star has fallen.  Eugene McCarthy is not to be mistaken with the witch-hunting Joseph McCarthy of neighboring Wisconsin, but we now know from which McCarthy’s paranoid politics Bachmann takes her cues.

Bachmann’s bombast is easily written off as a fundraising stunt appealing to the lowest common denominator of the far right fringe at best, and a dark, xenophobia at worst.  But we must pay heed, because any of us could one day be the despicable “other” that Bachmann and her ilk so revile.  Open the doors to ugly chauvinism, and Huma’s experience today could easily be a Ramesh’s, Bobby’s, or Nikki’s tomorrow.

Piling on Bachmann is easy in a time like this, and Bachmann’s congressional colleague from an adjacent district in Minneapolis, Keith Ellison (D-MN), a Muslim-American, was certainly entitled the righteous indignation he displayed.  Bachmann’s callous and flimsy accusations thoughtlessly impugned a community.  She played on stereotypes and assumed to question the patriotism and honor of another.  She allowed prejudice, ignorance, and paranoia to prejudge an entire religious tradition and its adherents.

What struck me deeply is how easy it is to form baseless opinions colored by our own biases.  I know I have done the same to others.

And I remembered the shocked incredulity my colleagues and I felt when we were on the receiving end of that same kind of treatment from Congressman Keith Ellison himself.

For nearly a decade each fall, a team of Hindu American Foundation (HAF) leaders and members spend a day of advocacy on Capitol Hill.  The preceding evening builds with anticipation as elaborate talking points are reviewed, delegates are briefed on the voting record and perspectives of each member of Congress they will meet, and sheaves of policy briefs are collated.  The next day, they descend on the Hill and fan out to key congressional offices, adding their own voice to the American dialog.

For two past Septembers, this delegation from HAF–consisting of several Minnesotans–visited the office of Congressman Ellison.  A meeting with this lawmaker is relevant for his influence and interest in foreign affairs.  Hindu Americans also saw in him a person with an understanding of political engagement as a religious minority. A potential ally in shared goals for a liberal society.  But for two years, the meeting has not gone well.

Two years ago, the congressman opened his meeting with our team with a direct query: “Are you affiliated with radical Hindu nationalist groups?”  And he began with probing for ties to the Rashtriya Swayamsevak Sangh and other Indian groups he considered “Hindu radicals.”  Our team, of mostly American born Hindu American physicians, lawyers, engineers, students, and business owners, was stunned.  What did our agenda of the separation of church and state, liberalizing of the religious worker visa, educating Americans about Hinduism, international human rights, and the like have to do with radicalism?  Had the congressman presumed that South Asians identifying themselves as Hindus must be suspect of a hidden agenda?  Did he presume that Hindus in America must be tied in to socio-political realities in India? Shocked and offended, our team engaged the congressman, answered his accusatory cross-examination and mumbled platitudes before moving on to the next office.

The following year, it only got worse for HAF’s meetings with Ellison.  Due to a “scheduling conflict,” instead of being welcomed into the congressman’s office, the Hindu American delegation was escorted to the cafeteria to meet with a staffer.  This staffer, Zahir Janmohamed, served as outreach director for the Indian Muslim Council, and writes extensively alleging Gujarat Chief Minister Narendra Modi’s direct involvement in the 2002 riots.  Janmohamed blindsided the HAF delegation with a grilling about an earlier HAF press release opposing a move by Indian leftists to cancel Sadhvi Ritambhara’s US visa tour raising money for her Vatsalyagram project.  He also chided HAF members, falsely as it turned out, for having advocated for Modi’s visa restoration.

This activist not only criticized HAF’s positions, but implied dark affiliations and sympathies to violence against Muslims in India.   An unfortunate encounter, several of the HAF delegates stormed off in disgust, as did the staffer, and HAF found itself combating a false narrative rife with innuendo and accusations.

Ellison, one would imagine, would have been highly cautious in laying out his cards so overtly.  His office has spent countless hours trying to tamp down queries after the Muslim American Society, that credible sources maintain is an American arm of the Muslim Brotherhood, paid for Ellison’s Hajj visit to Saudi Arabia in 2009.  And Janmohamed took to the airwaves only this month in Huma Abedin’s support criticizing Bachmann and other congressional “backbenchers,” as he called Bachmann and her coterie, for an election year ploy at Muslim American expense.  Ellison and Janmohamed know well how public ignorance and fears can be exploited to lay out dubious guilt-by-association arguments.

It may be sheer fantasy to imagine a political realm free of demagoguery, and McCarthyism will find life in loud accusations of subversion and disloyalty that Bachmann appropriated in her clumsy attack on Abedin.  But while Bachmann’s escapades are easy to caricature and repudiate, our interactions with Ellison reveal the whispered universality of bias and preconceptions.

In rejecting the Bachmann salvo, every one of us must look deep to reject labels and bigotry; decry misunderstandings and misinterpretations; generalizations and false innuendo.  And while Ellison rightfully battles Bachmann’s bias, he, like all of us, must ensure that he dispels his own.

Aseem Shukla, M.D. is co-founder and member of the Board of Directors of the Hindu American Foundation.  He is an Associate Professor of Surgery (Urology) at the University of Pennsylvania, Perelman School of Medicine. 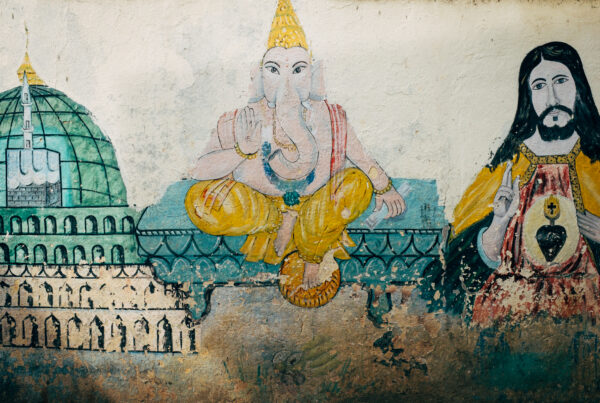