Photos: Hindu Kashmiri Pandit returns to her homeland, 30 years after exile
On The Issues 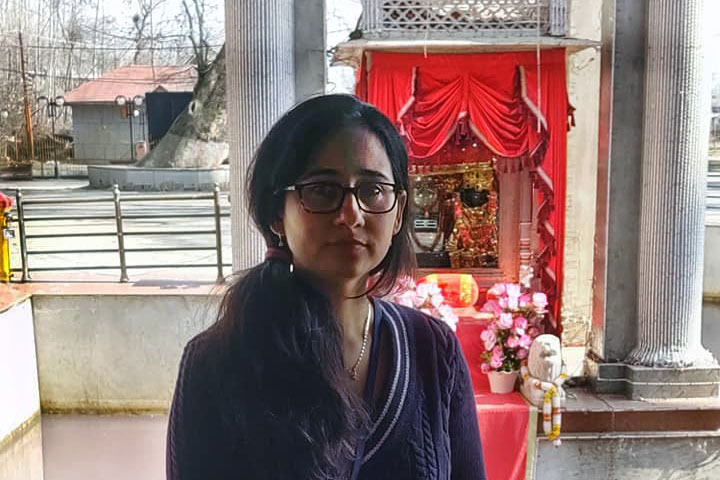 Amrita Kar still has fond memories of her life in the Kashmir Valley before she was forced into exile at just four years old. How she used to sit on her grandfather’s lap and watch from the window as the snow would fall outside. How she used to go out for picnics every Sunday and fly kites with her sister and dad. How she used to open the back door of her family’s newly built house for the fresh breeze and smell of wet mud.

But she also remembers the time a group of teenage Muslim boys surrounded their home when her dad was at work. How the French windows — the sills of which she used to happily eat fresh snow off of — shuddered under the loud banging of large menacing sticks. How she and her sister were crammed in a corner behind a mother who desperately wanted to keep her children safe. How it felt like an eternity, as she stood there with her eyes closed, not making a sound, not even daring to breathe.

During that time, the insurgency sponsored by Pakistan’s military and intelligence service to change the state’s demographics by cleansing non-Muslims from Kashmir had been in full effect. Kashmiri Pandits — the community of Hindus indigenous to the Valley — had become the target of threats, killings, rapes, and the destruction of religious sites and properties. Militants amassed in the streets in large numbers, chanting anti-Hindu slogans, and letters were sent to prominent members of the Pandit community, telling them “this land is only for Muslims,” and that if they didn’t leave immediately, their “children will be harmed.”

These were not empty threats, as one elderly Pandit woman told the BBC, “Our people were killed. I saw a girl tortured with cigarette butts. Another man had his eyes pulled out and his body hung on a tree…”

Thus, after also receiving death threats of their own, Kar’s family packed up their things and fled. They became among the more than 350,000 Kashmiri Pandits who were ethnically cleansed from the Valley between 1989 and 1991.

Flash forward 30 years to February 2020, and Kar lives in Philadelphia. She is secretary for the Kashmiri Overseas Association, a non-profit organization dedicated to protecting, preserving, and promoting Kashmiri ethnic and socio-cultural heritage. Shakun Malik, who is president, CEO, and chairperson of KOA’s board, is planning a trip to the Valley and invites Kar to come with her. But Kar is not sure if she’s ready. She still carries the traumatic memories of her last days in Kashmir, and is scared the Valley is still unsafe for Hindus. Malik, however, is persistent, and eventually convinces Kar.

So three decades after being cleansed from her birthplace, Kar boards a plane and returns to the Valley for the first time, apprehensive and unsure of what to expect.

Kar looks out of the window as her plane prepares to land at Srinagar Airport on February 9. Feeling nervous and fearful upon arrival, she embarks on a four-day journey through the state in what she describes as being a transformative and emancipatory experience.

Outside of Kar’s room at the Hotel CH2, where she stayed during her time in the Valley, is the scenic view of snowy mountain peaks. Srinagar, the city in which the hotel is located, is surrounded on all sides by the Himalayas.

Kar and Malik drive past Dal Lake on their way to Kheer Bhawani — a Hindu temple dedicated to the Goddess Ragnya Devi who is an incarnation of the Goddess Durga. Because they visited Kashmir during the anniversary of Afzal Guru’s execution and Maqbool Bhat’s death, Kar said there were very few tourists at the time.

Located near Srinagar in the Tulla Mulla village, the shrine dedicated to Ragnya Devi is situated above a sacred spring, the water of which is believed by devotees to change color as an indicator of future tidings. The color, Kar points out, was a dark red tinge when she visited in February. “Anything dark is basically not considered auspicious,” Kar said. “Of course, COVID happened right after.”

Diyas (clay lamps) offered by Kar sit in front of the shrine dedicated to Ragnya Devi. As soon as she put her head down to pray, Kar said prayers from a nearby mosque began to blare through a loudspeaker, disrupting her train of thought. “It was like a really disturbing feeling,” Kar said. “It was a very negative emotion, because it felt like they could have built a mosque somewhere else…”

Kar (left) takes a selfie with three officials who are tasked with guarding Kheer Bhawani, and has a chat with them to get a better idea of how tense the area is. Though they were limited in what they could discuss, Kar said they mentioned how they still have to apprehend, and in some cases, even kill those militants who attempt infiltration across the border from Pakistan.

On their way back from Kheer Bhawani, Kar and Malik stop to visit a mosque called Hazratbal Shrine. Located on the Northern bank of Dal Lake, the site is considered by many followers to be Kashmir’s holiest Muslim shrine.

Two Muslim women look into Hazratbal Shrine from the outside, as ladies are explicitly not allowed in through the main entrance.

Outside of Hazratbal Shrine, people relax to a picturesque backdrop of a rainbow and the snow-capped peaks of the Himalayan mountain range.

Kar and Malik are escorted by a local up to Gulmarg, a hill station in the Baramulla district of Jammu and Kashmir.

At the highest point of Gulmarg, Kar and Malik chat with local Muslims as they wait for tea to be heated by a traditional space heater called a bukhari. Kar, who asked them what they thought about Kashmiri Pandits, said one man replied by saying the Pandits could come back to Kashmir whenever they want and live in “their own properties.” When Kar pointed out that those properties were now occupied by others, the man said he had so much of his own land that they could buy some from him if they wanted, and then gave her his contact details.

During her last day in the Valley, Kar takes a shikara — a type of wooden boat — and visits various shops that operate out of houseboats on Dal Lake, where she bought a sari, her first purchase while in Kashmir.

Kar poses in front of a row of shikara boats during her last day in the Valley after shopping on Dal Lake. Kar said the experience she had while back in her homeland was so profound, she seriously considered the idea of moving there, but ultimately still doesn’t believe the government will provide protection for minorities who want to move back. “…There is no rule that says that if you’re a Hindu and you’re in Kashmir, you’ll get some security,” Kar said. “Militants will target you to make a point.”