Veda Vyasa: the sage who compiled the Vedas 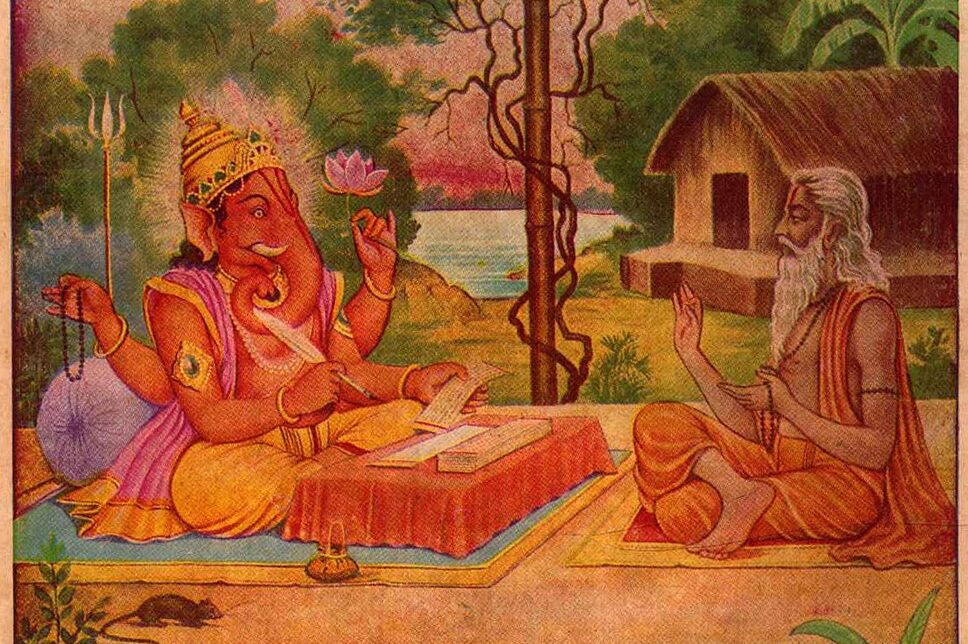 Consisting of a diverse family of philosophical teachings and customs, Hinduism is the oldest existing religion in the world, practiced today by billions of people and on every continent.

Believed by adherents to have no known beginning or end, and therefore referred to as Sanatana Dharma (the “Eternal Way”), there is no single founder, prophet, or authority of Hinduism.

Having said that, one cannot fully appreciate the Hindu religion without recognizing the significance of the sage Veda Vyasa, who is widely revered and credited for compiling much of Hinduism’s most prominent and influential spiritual texts, including the Vedas, the 18 Puranas, and the world’s largest epic poem, the Mahabharata.

The Vedas, translated as “knowledge” in Sanskrit, are a collection of hymns presenting key Hindu teachings regarding the Divine. Deemed eternal truths, the Vedas were passed down via an oral tradition for thousands of years before Veda Vyasa is believed to have compiled them in written form. It is said the philosophy of the Vedas was further developed and explained by Vyasa in the Puranas and the Mahabharata (which also includes the Bhagavad Gita — known as the “Song of God”).

Hindu texts say Vyasa was born during a period of time known as Dvapara Yuga, which is said to have ended roughly 5,000 years ago. According to the Vedas, time is cyclical, divided into four ages, or Yugas called Satya, Treta, Dvapara, and Kali (the Yuga we’re in now).

Because the Yugas move in a cycle, from Satya to Kali and then beginning again at Satya, a different realized soul is born in every Yuga cycle, specifically for the purpose of preserving the Vedas in written form. Thus, “Veda Vyasa” is the title or position — much like president, mayor, or chief — given to the particular sage specifically empowered by the Divine to compile and classify the Vedas at the end of a Dvapara Yuga.

The Veda Vyasa of the current particular cycle of Yugas was born to Satyavati, the daughter of a fisherman. During her youth, while performing her job of ferrying travelers across the Yamuna river, Satyavati met a great sage named Parashara. Becoming attracted to each other, the two went to an island where they could be alone, and ended up conceiving Veda Vyasa. The legend says that being no ordinary soul, Vyasa was born that very day, grew immediately into maturity, and was given the name Krishna Dvaipayana (“Krishna” meaning “dark” and “Dvaipayana” meaning “island-born”).

Determined to live the life of an ascetic, Vyasa left, but promised Satyavati he would return if  she ever needed him.

As providence would have it, Satyavati later became the wife of the emperor of the world, Shantanu, and had two sons with him. Unfortunately, Shantanu and the two sons died, leaving the kingdom in need of a king.

Without an heir to the throne, other hostile rulers threatened the stability of the kingdom and the world, and so Satyavati frantically searched for a solution.

Remembering Vyasa’s promise, Satyavati called upon her first-born and asked him to beget children with the widows of her dead sons. Vyasa agreed, and thus conceived a son with each of the widows, as well as one with a maidservant, producing three sons in total, before returning to his asceticism.

Hindus take away many lessons from Vyasa’s life, first and foremost being his determination to serve and look after the welfare of others.

From the moment he was born, he felt no desire for personal material pursuits, and instead chose to live a renounced life of spiritual discipline.

Though dedicated to his spiritual practice, when his mother and the world needed his help to bring stability to the kingdom by producing an heir, he set aside his personal commitments, did what was requested of him, and then returned to his renounced lifestyle without asking for anything in return.

And when he knew the coming of Kali Yuga was imminent, out of compassion, he compiled a plethora of spiritual texts to provide guidance for the people of what is considered the most difficult age.

Hindu scripture describes Vyasa as being a Chiranjivi, or immortal being who is still alive today, choosing to remain on the earth for the well-being of others until the end of the current Kali Yuga. Some of the more prominent sages of Hinduism’s most significant spiritual lineages — including Adi Sankaracharya and Madhvacharya, are said to have personally met Veda Vyasa and received instruction from him.

Because Veda Vyasa compiled the wealth of spiritual literature used by most of Hinduism’s major lineages, many view him as the original guru, which is why Guru Purnima, the day to pay respects to the guru, is celebrated on his birthday.

Though the religion has many schools of thought, resulting in a variety of different philosophical conclusions, followers of pretty much every Hindu sect can agree: Hinduism wouldn’t be what it is today if not for Veda Vyasa.