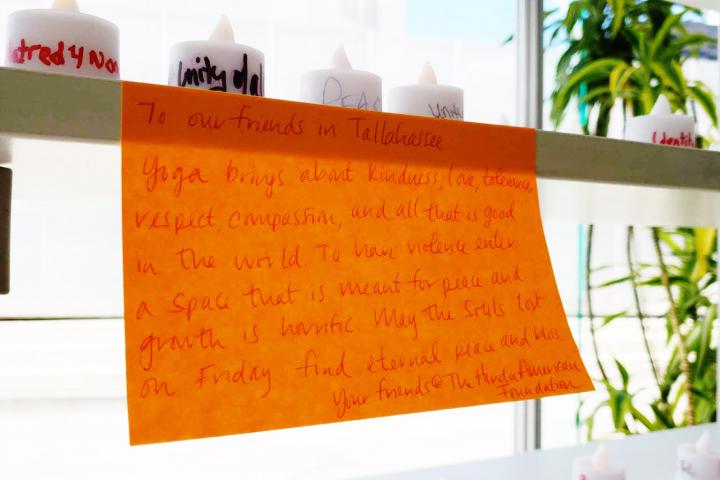 Toronto, Canada (November 5, 2018)— As attendees of the 2018 Parliament of the World’s Religions in Toronto, we are horrified by the news of a shooting at Hot Yoga Tallahassee — the 304th mass shooting in the United States this year. Such acts of violence are inherently tragic, made even more so when they occur at houses of worship and other spaces meant for retreat and reflection, as many yoga studios are increasingly becoming.

The first of yoga’s ethical principles is ahimsa (non-harming). It is a primary element of Hindu ethics, also taking a central role in Buddhist, Jain, and Sikh philosophies and practice. Coming as it does right before Diwali, the Hindu festival celebrating the triumph of good over evil, represented by the lighting of diyas (clay lamps), this shooting takes on particular poignancy and sadness. It is yet another reminder that gun violence can affect any of us and that much more must be done to prevent it.

We wish to offer our support, condolences, and compassion for all the victims in this shocking act of hate and violence. Know that we stand alongside you in this time of tragedy.

NOTE: Apart from HAF, unless specifically stated otherwise signatures above represent individual support rather than organization. Any organization listed is for reference only and does not indicate official endorsement. Signatories at time of initial release of this letter were solicited in person on the floor of the exhibit hall at the Parliament of the World’s Religions on Sunday, November 4, 2018.

If you were in attendance at the 2018 Parliament of the World’s Religions and would like to add your name, or your organization’s name, to this letter please fill out this form.

HAF will update this list of signatories as additional signatures come in.