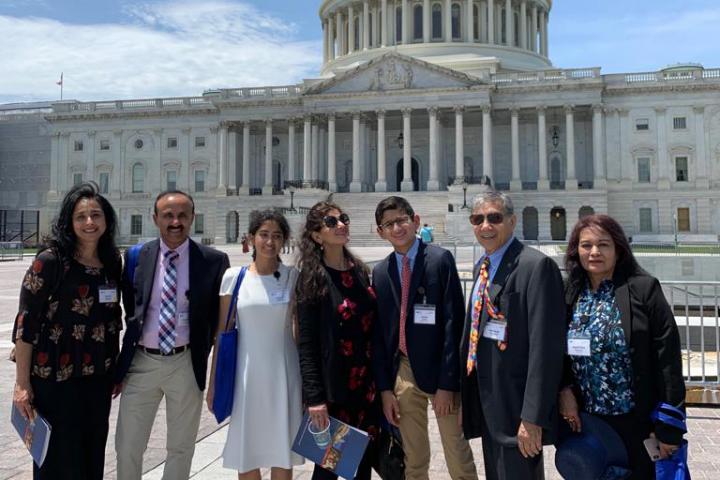 Washington, DC (June 29, 2019) — For the sixteenth consecutive year, the Hindu American Foundation (HAF) assembled a delegation of supporters in the nation’s capital to meet with elected officials and discuss strengthening the US-India relationship and condemning Pakistan-sponsored terrorism in the Indian state of Jammu and Kashmir. This year’s Advocacy Day was co-hosted by the Indo-American Kashmir Forum and in partnership with the Kashmir Hindu Foundation.

“Our annual Advocacy Day is a great opportunity for HAF supporters to both connect directly with their elected Federal representatives, as well as get a first-hand, insider’s perspective on how Congress works,” said Jay Kansara, HAF Director of Government Relations.

During meetings with US lawmakers, HAF supporters urged for swift passage of H.Res 408, introduced by Rep. Brad Sherman (D-CA), Co-Chair of the House India Caucus and Chairman of the House Foreign Affairs Subcommittee on Asia, the Pacific, and Nonproliferation, and Rep. Scott Perry (R-PA).

The resolution strongly condemns the February 14, 2019 Pulwama terrorist attack by Pakistan-based militants in the Indian state of Jammu and Kashmir that killed 41 Indian police officers.

“I want to draw attention to the ongoing problem of terrorism in Kashmir and the often-overlooked plight of the Kashmiri Hindu Pandits,” Rep. Sherman said in a statement he submitted into the Congressional Record on Friday, June 21st.

HAF supporters also urged Members of Congress to pass H.R. 2123, the US-India Enhanced Cooperation Act of 2019. Introduced by Rep. Joe Wilson (R-SC), Ranking Member of the House Foreign Affairs Subcommittee on the Middle East, North Africa, and International Terrorism and an active member of the India Caucus, this bi-partisan bill would strengthen US-India political and defense cooperation and elevate India to non-NATO ally status — a status reserved only for a few close allies.

In addition, HAF delegates met with over 30 Senate offices in support of two amendments to the 2020 National Defense Authorization Act (NDAA) hours before Senators began to debate the must-pass bill.

One of the two amendments, introduced by Senate India Caucus Co-Chairs Sens. John Cornyn (R-TX) and Mark Warner (D-VA) regarding US-India defense cooperation in the Western Indian Ocean, was successfully added to the NDAA.

“Including this provision in the National Defense Authorization Act would be a major step to bolster US-India ties and strengthen our alliance. It is only fitting for the world’s oldest democracy and the world’s largest democracy to continue to work more and more closely together,” Sen. Cornyn said on the Senate floor Monday night.

In addition, HAF supporters pushed to boost membership of the House and Senate India Caucases, which currently have 108 Representatives and 38 Senators, respectively.

The House and Senate India Caucasus bring together likeminded Representatives and Senators from both sides of the aisle who promote stronger relations between the United States and India across a broad range of issues, such as promoting democracy, economic development, human rights, scientific research, disaster relief, and fighting terrorism.

“We have moved forward with the US-India relationship based on democracy, based on strategic interests,” Rep. Brad Sherman said at the HAF Capitol Hill Reception on Monday evening where he received the Hindu American Foundation’s ‘Friend of the Community’ Award. “I look forward to the day when India is classified, in effect, as a major non-NATO ally,” Sherman said to a rally of applause.

“The scale and scope of this year’s Advocacy Day is a testament to the emergent voice of the Hindu American community,” said Suhag Shukla, Esq., HAF Executive Director.

“We look forward to continuing to work with Members of the House and Senate to strengthen US-India ties, highlight the ethnic cleansing of Kashmiri Pandits, and address the ongoing threat of Pakistan sponsored terrorism in India’s state of Jammu and Kashmir,” added Shukla.