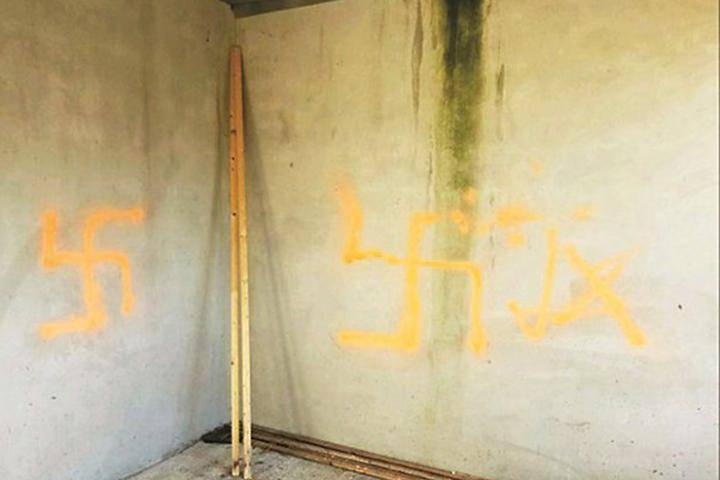 Washington DC (October 12, 2016) — Leaders of the Hindu American Foundation (HAF) were dismayed to learn that one of the most ancient and sacred symbols of their faith was used in an attempt to intimidate Indian American politician Peter Jacob in Union, New Jersey over the past weekend.

As reported in India-West, twice in the past several days the home of Peter Jacob was spray painted with swastikas, once on the sidewalk outside his house and once on its walls (the latter pictured above).

Jacob, a Democrat, is currently running against Republican incumbent Leonard Lance to represent New Jersey’s 7th district. Ads in the campaign run by Lance at one point compared Jacob to a terrorist “due to the color of his skin,” a Jacob campaign spokesperson noted. However, following the incident, the Lance campaign has condemned the vandalism as “abhorrent” and has urged a complete police investigation.

“The swastika is a positive symbol originating from the Hindu religion, but has been usurped by the Nazis and other nefarious groups who seek to twist the symbol literally and metaphorically to serve negative and evil purposes,” said Jacob in a statement to HAF.

As HAF has repeatedly pointed out, the swastika is an ancient and auspicious Hindu symbol, prominently used as well by other faiths in India, as well as pre-Christian traditions throughout the world. To this day it is still commonly used at the entrance of Hindu homes, in temples, and on invitations to auspicious occasions such as weddings and other rites of passage. In Sanskrit the word is a combination of “su” (meaning good) and “asti” (meaning to exist).

Unfortunately, the use of symbol by Hitler and the Nazis, called by them in German hakenkreuz, continues to overshadow the positive meaning behind the symbol. The irony in this particular case, that an Indian American’s home has been vandalized using a symbol that in India would be painted on it in joy, makes the ongoing use of the swastika to represent one of the most bigoted and hateful ideologies in history all the more tragic.

“We at HAF are appalled by such an attack on a candidate for political office in this country,” said Aesha Mehta, HAF Associate Director. “We call upon local, state, and federal law enforcement to investigate this thoroughly as the hate crime it most clearly is.”