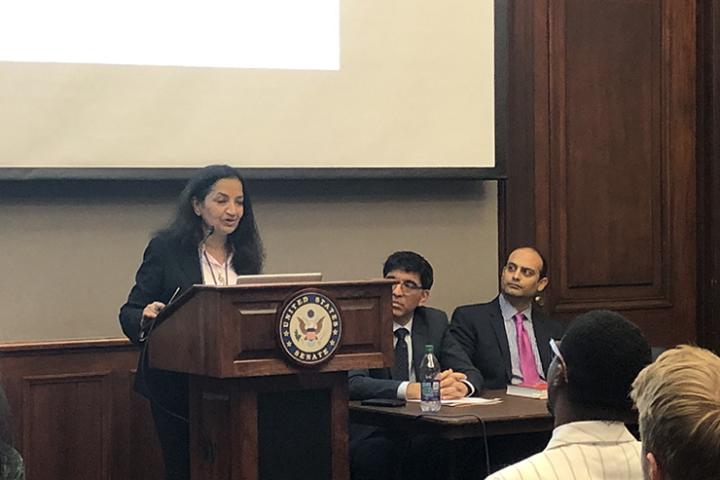 As Congress returned to Capitol Hill this week, the Hindu American Foundation hosted staff from the US Senate and House of Representatives for an update and briefing on the situation in the Indian Union Territories of Jammu & Kashmir, and Ladakh. The HAF briefing is the first event held on the topic in the nation’s capital since the Indian government’s historic move to repeal the discriminatory articles 370 and 35A of the Indian constitution on August 5, 2019.

Entitled ‘Locked Down or Liberated? The Future of Kashmir Post-Articles 370/35A’, the briefing was held in the US Senate Russell building and featured remarks from Dr. Tara Kartha, Distinguished Fellow, Institute of Peace & Conflict Research (New Delhi), and Rajiv Pandit, MD, Board Member, Indo-American Kashmir Forum.

HAF Executive Director Suhag Shukla, Esq. opened the program and welcomed the audience. She introduced HAF’s ‘History of Kashmir” short film Parts I & II, which provided an objective explanation of the historical record, as well as the panelists.

Dr. Kartha (pictured above) discussed the media’s double standards regarding the Indian government’s move vis-a-vis Pakistan’s actions in Pakistan Occupied Kashmir (POK) such as the Pakistan government’s ceding a large territory to China, dividing the original area into two, the complete absence of civil rights in Gilgit-Baltitstan, as well as Pakistan’s 20-year-long support of terrorist groups who have launched attacks in Kashmir and other parts of India. She also provided insight on how the Indian government had lifted communications restrictions on all districts, though a ‘curfew’ is being imposed in parts of the Kashmir Valley by terror groups like Lashkar-e-Taiba (LeT), a US State Department sanctioned Foreign Terrorist Organization (FTO), forcing residents to stay indoors and threatening business owners from opening their shops to perpetuate the misperception of a lockdown, and thereby preventing a return to normalcy.

“The media and NGOs have ignored the series of moves by Pakistan in PoK, which were declared illegal by their own courts. Islamabad has successfully kept the plight of the people of these areas out of the public eye, even while keeping them under an iron control and nobody talks about it,” stated Dr. Kartha.

The program also featured a presentation by Dr. Rajiv Pandit (pictured below), a member of the Kashmiri Hindu minority population in Jammu & Kashmir, who explained what life was like in the Kashmir Valley before his family and community faced Islamist attacks, rapes, and killings in 1989-90, resulting in the ethnic cleansing of over 350,000 Kashmiri Hindus. He explained the effect that Wahabi Islamic extremism, which had been exported by radicals in Pakistan and Afghanistan following the Russian-Afghan war of the late 1980s, had on the Valley’s indigenous people, including Sufi Muslims. Dr. Pandit’s presentation showcased the beauty and symbolism of Kashmir, as well as the emotional devastation experienced by the religious minorities. He also shared how the corrupt local government, empowered by Articles 370 and 35A, had usurped billions of dollars of federal aid and economic development that had been appropriated over the years.

“The current narrative on Kashmir is almost entirely missing the perspective of the religious minorities, including the Pandits, who are the indigenous people of Kashmir. Their return and re-settlement to the Valley, following the abrogation of these articles, is critical to the values of secularism and democracy that India represents,” explained Dr. Pandit.

Samir Kalra, Esq., HAF Managing Director, moderated the panel discussion. His questioning further exposed the necessity of the repeal of both Articles 370 and 35A, which were discriminatory in nature, and how the removal of these articles would bring new rights and freedoms for the people of Jammu & Kashmir, and Ladakh and was widely supported throughout all of India.

“We thank Senator John Cornyn (R-TX), Co-Chair of the Senate India Caucus, for his assistance and support in providing Congressional staff the opportunity to hear first-hand accounts from religious minorities in the region, to get a thorough understanding of the historical facts, how we got here, and to see the devastating impact that Pakistan-based terrorism has had on the people of Jammu & Kashmir who continue to live under threat of terrorism today,” stated Suhag Shukla, HAF Executive Director. “Pakistan PM Imran Khan must end his financing and support of terrorism, stop the callous threats of nuclear war, and start acting like a responsible leader who belongs on the world stage,” she said.