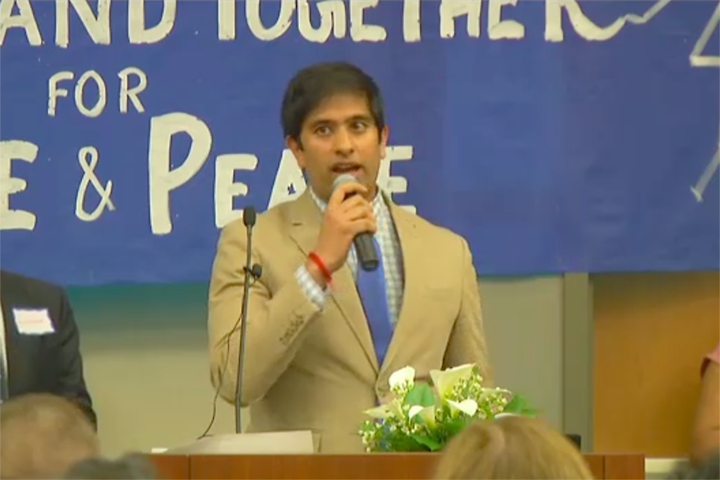 Washington, DC (February 28, 2017) — More than 2500 people attended a multi-faith march and prayer vigil in Olathe, Kansas on Sunday to honor the victims of the hate crime shooting in which Srinivas Kuchibhotla was killed, and Alok Madasa and Ian Grillot were injured the week before.

Following prayers from Hindu, Christian, Muslim, Sikh, and Jewish leaders, Alok Madasani, using crutches to reach the podium, addressed the crowd. Madasani spoke for some time about the loss of his friend and coworker of nine years before telling the audience, “It was rage and malice in an individual’s heart that killed my friend. It’s an isolated incident that doesn’t reflect the true spirit of Kansas, the Midwest, or the United States.”

Olathe mayor Mike Copeland looked out over the gathering and said, “I see one family, an amazing tapestry of different skin colors, national origins, and traditions. Our fabric is made strong by the 84 languages in the Olathe public schools. It is bound together by our proud history of diversity and the daily celebration of the diverse backgrounds and lineages that make us who we are. It will never tear.”

Of the Indian community specifically, Copeland remarked, “You enrich our community. You are our brothers and sisters. When you grieve, we all grieve. When you celebrate, we all celebrate. We grow together and stand together, each and every day.”

HAF’s Director of Government Relations Jay Kansara delivered remarks at the vigil lauding the City of Olathe and its diverse population for displaying Vasudhaiva Kutumbakam, ‘the world is one family.’ He thanked the Government of India for its quick response to the tragedy, pledging on behalf of HAF, “We will ensure that Srinivas’ legacy will ring loud and clear in Washington, DC, so that this doesn’t happen in America again.”

“It is our hope,” Kansara later added, “President Trump uses the opportunity he has when speaking to the special joint session of Congress later today to address the rising levels of hate violence in our nation.”

Hate crimes and acts of bigotry have risen notably in recent months. Jewish cemeteries in St Louis, Missouri and Philadelphia have been vandalized, offices of Jewish civil society organizations have received bomb threats, the burning of a mosque in Texas last month has been discovered to be arson, and a Denver area Indian man’s home was vandalized with eggs, feces, and racist graffiti, to name just a few incidents in the past few weeks.

HAF urges anyone that has been harassed, assaulted or threatened with harm on the basis of their identity (e.g., race, religion, disability, ethnic origin, or sexual orientation), to report the incident to law enforcement immediately. Similarly, community members should report any incidents involving vandalism, hateful graffiti, desecration, arson, or violence directed towards temples or other properties. HAF also requests help in tracking incidents of identity-based or bias-motivated intimidation, threats, harassment, and violence being experienced in our communities by filling out the Bias-Motivated Crime Data Collection Form, if they or someone they know has experienced or witnessed an incident.