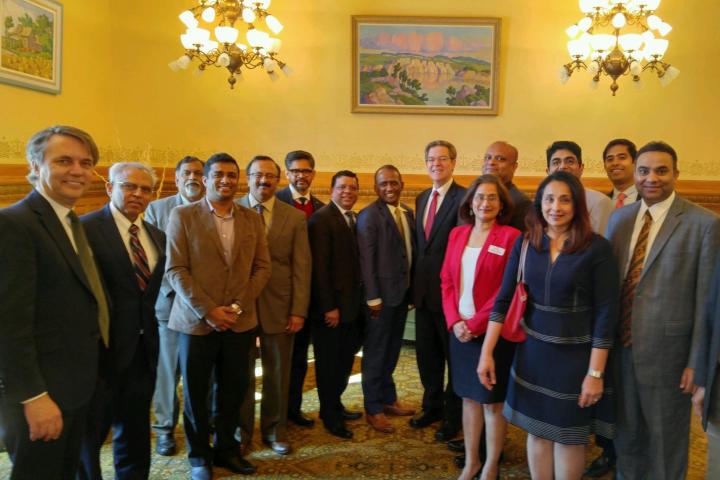 Topeka, KS (March 3, 2017) — Leaders of the Hindu American Foundation (HAF) were honored to join the Indian and Hindu American community of Kansas yesterday to meet with Governor Sam Brownback and Lt. Governor Jeff Colyer. The topic at hand was the tragic hate crime shooting at a bar in Olathe, last week, in which Srinivas Kuchibhotla was killed and Alok Madasani was injured by bullet wound, both Indian immigrants working for Garmin. Ian Grillot, an American bystander, remains critically injured from his heroic attempt to stop the shooter from inflicting more harm.

The recent public Facebook post written by Sunayana Dummala, widow of Srinivas, was presented to the Governor. Messages for the Governor sent to the delegation from Sunayana and Alok were read as well, both thanking the Governor for his attention to the tragedy and urging for justice to be served.

Community leaders and HAF were encouraged by the openness and sincerity of Kansas officials in the wake of the shooting. Governor Brownback gave assurances that the perpetrator in custody, Adam Purinton, currently facing first-degree murder and attempted first degree murder charges, would be prosecuted to ‘furthest extent of the law’. He further gave commitments that state officials would cooperate with federal authorities officially investigating the incident as a hate crime.

“The hateful actions of one man don’t define us-KS welcomes & supports Indian community,” Governor Brownback said in a tweet shortly after the meeting.

Lt. Governor Jeff Colyer also took to Twitter to express his support after the meeting, “Unique contributions of the Indian community make KS a better place. We stand with them in the face of this crime.”

Anupam Ray, the Consul General of India based in Houston, TX, was also present to convey concern about the safety of its citizens from the Prime Minister of India, as well as gratitude for the heroism of Grillot. The delegation also included Mayor Usha Reddi of Manhattan, KS.

Community leaders discussed ways forward, including: strengthening state hate crime laws, greater engagement by the state government to the Indian and Hindu American community, education to encourage better understanding of Indians and Hindus in Kansas and their contributions to Kansas’ vibrant economy and society, as well as legislative and executive proclamations honoring the community. A potential Diwali observance at the State Capitol was also discussed.

“The meeting yesterday with Governor Brownback and Lt. Governor Colyer was very fruitful in my opinion,” said Mr. Sridhar Harohalli, Chairman of the Board of Trustees of the Indian Association of Kansas City. “The delegation which included Dr. Anupam Ray, the Indian Consul General, really helped us get assurance that this incident will be prosecuted effectively. Governor Brownback’s commitment help to get Srinivas’ widow Sunayana Dummala back to her home and career in Kansas was also heartening. We look forward to working with his office on initiatives such as the Indian Heritage Month to further enhance awareness about our community in the state.”

HAF committed to remain engaged with the local Indian and Hindu American community, alongside all ethnic and religious partners. HAF pledged to work with the Department of Justice and other government agencies to facilitate ‘Know Your Rights’ seminars across the nation to allay fears and uncertainty in the wake of the tragedy in Kansas.

“Governor Brownback recalled an old adage of having two choices in the face of tragedy — becoming bitter or becoming better. Based on the assurances he made that justice will be served, Kansas is on the path to better,” said Suhag A. Shukla, HAF’s Executive Director. “His promise for greater outreach and action to ensure that all Kansans — regardless of background — are not only safe and secure, but are welcomed as an integral part of Kansas will also go a long way for Srinivas Kuchibhotla’s tragic death to not go in vain.”

HAF urges anyone that has been harassed, assaulted or threatened with harm on the basis of their identity (e.g., race, religion, disability, ethnic origin, or sexual orientation), to report the incident to law enforcement immediately. Similarly, community members should report any incidents involving vandalism, hateful graffiti, desecration, arson, or violence directed towards temples or other properties. HAF also requests help in tracking incidents of identity-based or bias-motivated intimidation, threats, harassment, and violence being experienced in our communities by filling out the Bias-Motivated Crime Data Collection Form, if they or someone they know has experienced or witnessed an incident.