Melinda Byerley, on those xenophobic tweets and your apology, you really should have known better

Melinda Byerley, on those xenophobic tweets and your apology, you really should have known better 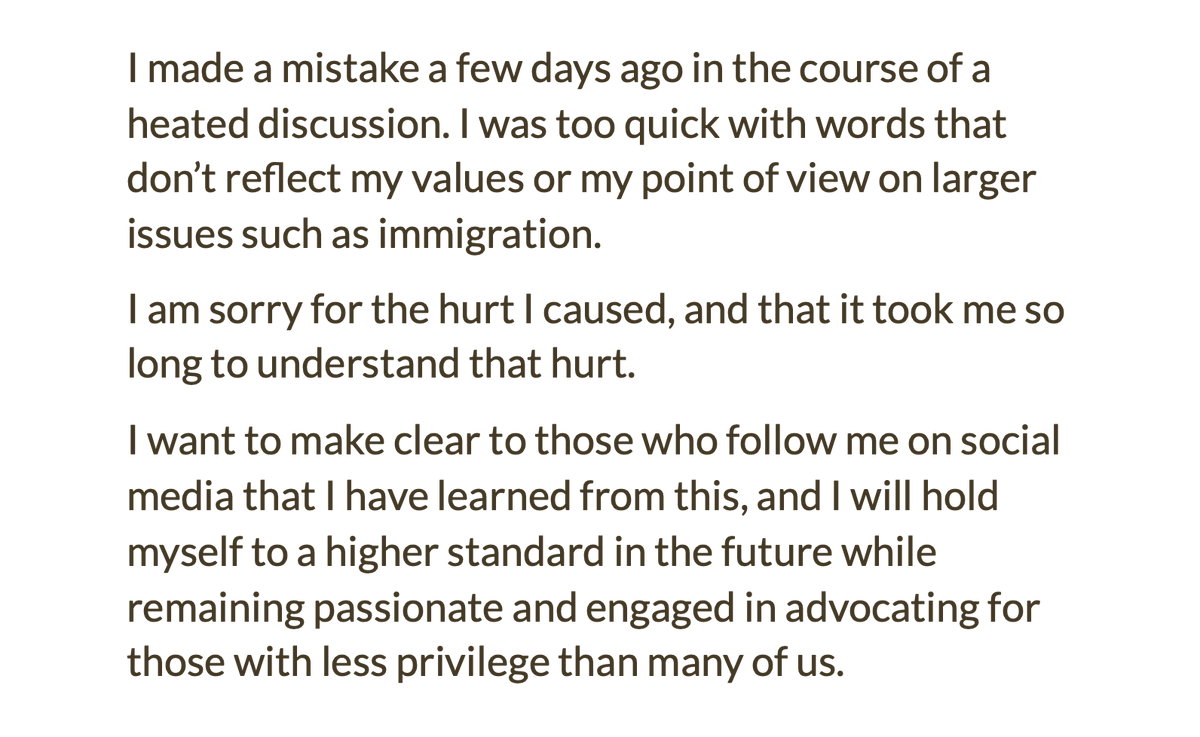 As a self-described champion of “Diversity in Tech” you certainly should have known how tweets about “rich tech” immigrants in Silicon Valley being “parasites” who should “go home” would be taken: as pure and simple racism and xenophobia.

And as the head of a digital marketing company whose tagline boasts of “empathy and common sense,” as core values, you should have known why your public apologies have fallen flat. Saying that your anti-immigrant tweet-rant was done “in the course of a heated discussion”, “was too quick with words that don’t reflect [your] values,” and that you have “learned from this”  is disingenuous about the circumstances surrounding your statements, shifts blame, and doesn’t bother to acknowledge us, the targets of your racist rant, directly.

Your follow up apology doesn’t land either because you still haven’t admitted that your first response to criticism was to double down, and then lie and accuse those seeking to hold you accountable of “doctoring” images and defaming you.

As often as a person genuinely says something they don’t mean in a heated argument (let’s be honest, there was no heated discussion), just as often  spontaneous outbursts can reveal a person’s true unvarnished feelings.

This is how hatred is sown. You should know this.

You should also know that using the word ‘parasite’ to describe immigrants has disturbing historical echoes of the exact sort of language used against Jews in Nazi Germany in the 1930s, against the Tutsi minority in Rwanada in the 1990s, and in violence directed against African migrants in South Africa during  in the 2000s. These types of references can still be found on white supremacist sites like Stormfront, where both Jews and Hindus are described as “parasite populations”.

Bottom line: dehumanizing rhetoric can have grave consequences for minorities, so the damage is done.

That you somehow thought ‘immigrant’ remained the appropriate description of either Peter Thiel or Vinod Khosla, both of whom came to the United States more than 40 years ago, makes your words all the more xenophobic, hateful, and ignorant.

Also trying to say that apartheid and caste-based discrimination are being brought to the United States by these individuals by virtue of their ethnic heritage (in the case of Khosla) or nationality (Thiel lived previously in South Africa), too reeks of xenophobia and ignorance.

When you appear to rely on known anti-Indian and anti-Hindu activists for your information about people of Indian descent, surely you can understand why we would push back. Your assertion about immigrants bringing an Indian caste system to America  perpetuates inaccurate racist and colonial stereotypes and a false normalization of Indians and Hindus as inherently bigoted. An immigrant or any person of Indian descent deserves the same privilege extended to every other immigrant, and that’s all of us regardless of background, of being seen as Americans and no longer responsible or accountable for social or political conflicts in their countries of origin.

This is how ignorant stereotypes spread and are reinforced. This too you should know.

We urge you to truly examine how a clearly self-identified Bay Area liberal could use racist and anti-immigrant language sounding so closely to the xenophobia expressed by white supremacists.

In a spirit of compassion, goodwill, and understanding, please know that we will be holding you to your words about holding yourself “to a higher standard in the future.”

We also ask that you seek out a genuine understanding of our culture, values, and  aspirations and the positivity we bring to the diversity of the United States. You can do this by partnering with organizations like ours. We’re focused on educating the public about Hinduism and advocating for policies that benefit all people and the planet. So to this end, we invite you to have a conversation on our podcast, That’s So Hindu, and ask that you consider hosting a variety of Indian and Hindu American immigrants in tech on your podcast, Stayin Alive, so that you and those you influence can gain authentic understanding of who we are, the diversity of our beliefs, and even engage in constructive debate over differing perspectives and ideas.

Indeed, there have been calls to cancel your access to numerous prestigious fora, but we’d rather not succumb to such illiberalism. We don’t believe canceling resolves the internalized animosity and stereotypes that seem to lie just under the surface for many who claim to champion diversity and inclusion.

Only constructive engagement with people different from you and who may disagree with you can lead to actual diversity. Diversity and inclusion that is welcoming of differences that are not just skin deep will take courage. Show us you have the courage it takes.

Special thanks to @BurntOutCase, @FleischPanier, @MJaadugar, and @asc89 for their work in raising awareness about this and their advocacy.