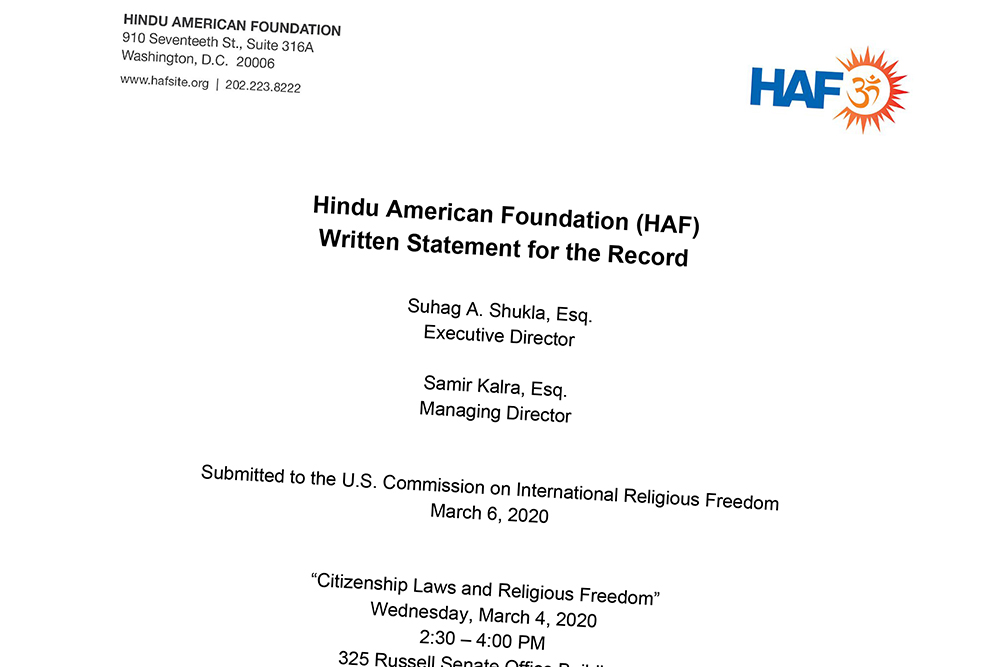 The Hindu American Foundation has submitted a written statement for the record for the US Commission on International Religious Freedom’s March 4, 2020 hearing “Citizenship Laws and Religious Freedom.”

“India has a centuries long history of providing shelter to diverse groups fleeing religious persecution in their native countries. The Citizenship Amendment Act is a continuation of that policy intended to deal with an acute refugee and humanitarian crisis within India’s borders. And in contrast to some of the countries listed above, the CAA does not disenfranchise or strip the citizenship of any of its citizens.

“That being said, the language of the current law could have better reflected the spirit behind this critical, necessary amendment if the language was expanded. At HAF, we suggest that this is the very intent the bill should articulate. We would strongly recommend that the Government of India reconsider the definition of religious and ethnic refugees as follows:

“Members of a religious or ethnic minority community who are unable to return to their home countries of Afghanistan, Bangladesh, or Pakistan, and unable to obtain protection in those countries due to past or well-founded fear of future persecution on account of religion or ethnicity.””

Remarking on the hearing, Kalra stated:

“It’s deeply troubling to see US governmental bodies, such as the USCRIF hold hearings that perpetuate misinformation about the intent and impact of India’s Citizenship Amendment Act. This only serves to further compound the irresponsible statements that have come from the media and some US lawmakers, which has only fueled more tension and violence in India. Tragically, lost in all the false and misleading propaganda are the real victims that the CAA intended to help — the religiously persecuted refugees from Afghanistan, Bangladesh, and Pakistan who are stuck in legal limbo and living on the margins of Indian society.”