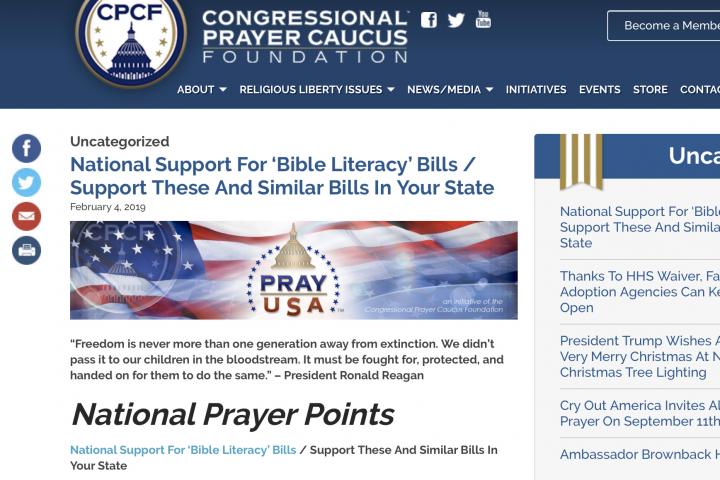 Washington, DC (February 7, 2019) — The Hindu American Foundation is committed to religious freedom as the cornerstone of American democracy. It is because of this that we have joined Americans United for Separation of Church and State as part of a broad coalition of 43 prominent religious, civil rights, and secular organizations to oppose Project Blitz. Project Blitz threatens to strip away the separation of church and state by enshrining a narrow interpretation of Christianity into law with the ultimate goal of imposing a particular set of beliefs and practices on all Americans and using religion as a basis to discriminate.

“Strong protections on religious freedom benefit everyone in America, regardless of your beliefs,” asserted Suhag A. Shukla, HAF Executive Director. “However, when, under the guise of religious freedom, efforts are made to privilege one particular conception of religious belief above all others, the foundations of freedom and democracy begin to rapidly erode. Religious freedom as promised by our founding fathers is turned into a sword rather than a shield.”

The organizers of Project Blitz, the Congressional Prayer Caucus Foundation, are blunt in their intent: “To protect the free exercise of traditional Judeo-Christian religious values and beliefs in the public square, and to reclaim and properly define the narrative which supports such beliefs.”

The coalition letter explains how they, through this comprehensive project, intend to bring this about:

“Project Blitz promotes a three-tiered framework of state bills meant to incrementally redefine religious freedom…with each tier laying the groundwork for the next. This framework starts by pushing what its authors believe will be less controversial measures, such as requiring “In God We Trust” to be posted in public schools. Using those bills as a foothold, it then seeks to pass more dangerous legislation, like bills that allow taxpayer-funded agencies to turn away couples seeking to foster or adopt children in need of stable and loving homes because they are same-sex or the ‘wrong’ religion.”

Efforts to introduce Bible study into public schools (under the misleading moniker of “Bible literacy” bills) are also a leading part of the agenda.

Read the full letter and view list of signatory groups.

Project Blitz is already underway. Since 2017, some 75 bills have been introduced into state legislatures that forward the first tier goals of Project Blitz. Alabama, Arizona, Florida, Louisiana, and Tennessee have passed “In God We Trust” bills, which will place the motto on public buildings, police vehicles, and in public schools.