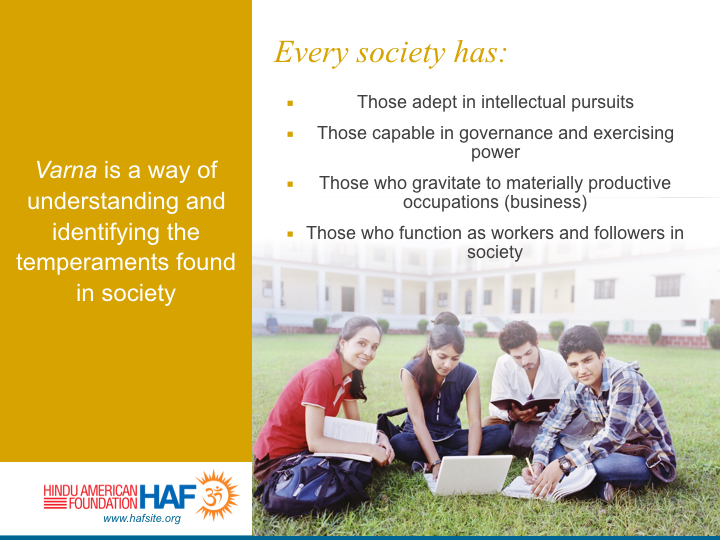 Over the weekend of May 14-15, 2016, images began circulating on Twitter which were taken from a Hindu American Foundation presentation on the history and evolution of caste in India, the distinction between varna and jati, historical and current discrimination based on this, and efforts to counter such practices.

The images in question are slides 7 and slide 8 from an older version of this presentation, reproduced below. All of HAF’s 101 presentations have been redesigned over the past few months, and new ones are currently being designed. The caste presentation was only the latest to be redesigned. Here’s the full and current version of the presentation, as well as a primer text intended to accompany it, both part of HAF’s Hinduism 101 series.

The innuendo in posting the images out of context and without further comment, speedily picked up upon by retweeters, is that these slides are part of some report wherein HAF is saying that an ideal society in the 21st century is based around the four traditional varnas and that, taking this line of false insight to its absurd end, caste discrimination is a good thing.

In fact this position couldn’t be further from the truth of HAF’s intent in producing this presentation or our past stated positions on caste discrimination. Neither is it the intent of the proposed changes to the California textbook frameworks that we have publicized through our #donteraseindia campaign.

To put to rest these unfounded smears against HAF, let’s take a look at the current presentation in its entirety. There have been changes in visual appearance since the previous one, but the text is by and large the same. Also, there is animation that doesn’t show on a single slide, so please forgive some graphic wonkiness.

Is what is presented above actually bigotry, a charge that has been leveled against HAF in connection with the excerpted images at the top? Is it bigotry to present the history of varna and jati in India, pointing out that revered Hindu teachers and leaders have condemned it, pointing out that caste discrimination is both illegal yet unfortunately still exists, describing it as being a problem today?

HAF National Leadership Council member Swaminathan Venkataraman writes, “There can be no two ways about the fact that caste-based discrimination is a terrible social practice. Modern India’s policy of reservations was explicitly designed to undo the deleterious impact of its history.” The origins of caste discrimination may be subject to debate, but does this framing quote really support allegations of bigotry?

Only if you have a mind hardened against Hinduism as a whole, determined to see ill-action and oppression in every aspect of the millennia-old tradition, ignoring all the profound insights made into the nature of existence, into many fields of practical science and the arts, convinced that no change is possible in a tradition that is the epitome of adaptability, could bigotry been gleaned from such a statement.