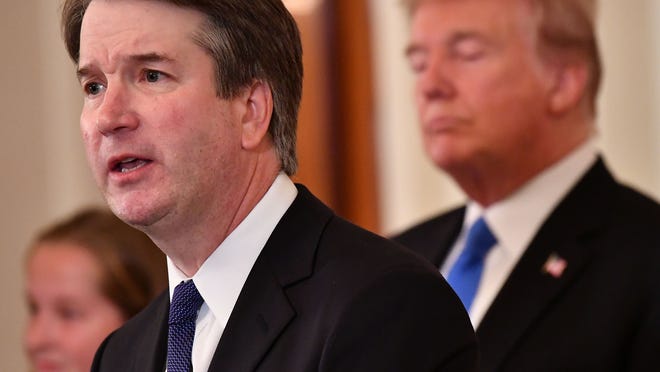 The following is a guest post by Manisha Sunil, one of HAF’s 2018 summer interns, a third year government and politics major with a concentration in international relations at the University of Maryland, College Park.

The nomination of Brett Kavanaugh has brought upon a divisiveness that is to be expected of this political climate. At the forefront of this debate, for many, is Kavanaugh’s record on religious liberty. On the right, John Malcolm and Elizabeth Slattery of The Heritage Foundation staunchly defend Kavanaugh as a guardian of religious freedom. Evangelical voters praise the Trump appointee as someone who would defend the Christian right on issues of abortion and sexuality. On the other side, top Democrats such as Sen. Chuck Schumer (N.Y.), Sen. Amy Klobuchar (M.N.), and Sen. Patty Murray (W.A.) have voiced their concerns over Kavanaugh’s religious lens regarding reproductive rights.

As a Hindu woman, I hold concerns regarding the nomination of Brett Kavanaugh to the Supreme Court. The conservative Yale educated judge on the D.C. Court of Appeals possesses all of the accomplishments that generally come with being a Supreme Court justice. However, his legal records and public remarks make it clear that he stands in opposition to true religious freedom, having demonstrated repetitive disregard for the separation of church and state.

In a Fall 2017 speech, the nominee celebrated former Chief Justice William H. Rehnquist for his opposition to “a wall of separation between church and state.” This wall of separation, a metaphor coined by Thomas Jefferson in an 1802 letter to the Danbury Baptist Association, has historically acted as a strong foundation for interpretations of the First Amendment barring the establishment of a religion by the government.

When this wall of separation is disregarded, not only do religious minorities suffer, but religious communities as a whole are disadvantaged. When a government demonstrates preferential treatment to one religious group over another, this inherently places religious minorities on a second-class tier. It paves the way for government overreach into the lives of private citizens both by pushing a religion onto its citizens and inviting government intrusion into religious institutions. Kavanaugh’s legal history suggests that this disdain for the separation of church and state significantly impacts his rulings.

One of the most troubling aspects of Kavanaugh’s legal career is his unwillingness to separate schools from religion. In one such case, Santa Fe Independent School District v. Jane Doe, a Texas school district was challenged for allowing a student to recite an “overtly Christian” prayer over the loudspeaker prior to football games. Eventually the district mandated that the prayer must be non-sectarian and non-proselytizing, however this was still considered to be religious overreach. Kavanaugh filed an amicus brief claiming that the student’s speech was private speech, making it protected, and that not allowing the student to recite a prayer would be unconstitutional.

Students should undoubtedly be permitted to express their faith in a personal manner within schools. However, schools mandating a ritual prayer over their loudspeaker to the entire student body, even if it is recited by a student and in a non-sectarian manner, still establishes a manner of prayer to the student body. It demonstrates sponsorship of prayer to a higher power by the school district, favoring those who subscribe to such prayer over those who do not. Engel v. Vitale famously found that state sponsored prayer, even if it is voluntary and non-sectarian, is still unconstitutional in schools. In their policy brief about prayer in schools, the Hindu American Foundation (HAF) notes that even non-sectarian and nonproselytizing prayer can be a slippery slope towards the “imposition of one religious tradition on all students.”

In another attempt to blur the link between church and state, Kavanaugh represented former Governor Jeb Bush in his crusade to develop a school voucher program that could be used for religious private schools. As the vast majority of private schools are religiously affiliated, specifically to Christian faiths, this acts as a strong push for the government to subsidize religious education. As a Hindu, this means that taxpayer money would be used to fund educational institutions that are exclusionary of my own faith. I firmly believe that all students, regardless of background, should have access to high quality education that allows them to flourish. I do not, however, see school vouchers for religious institutions as the answer.

Furthermore, Kavanaugh has allowed religious ideology to bleed into his rulings regarding public health — most notably, regarding a woman’s right to choose. Although Kavanaugh has not explicitly stated he plans to overturn the long contested Roe v. Wade, he is notably anti-choice, having praised Justice Rehnquist’s dissent in the case. Specifically, he agrees that unenumerated rights should not exist unless they are “rooted in the traditions and conscience of our people.” This was demonstrated in his recent decision (that was later overturned) that barred a 17-year old undocumented girl from receiving an abortion.  In a country where laws and norms have been based around Judeo-Christian values, this is a troubling statement for religious minorities.

When overtly Christian values influence how we view and shape our laws, it paves the way for hostility towards values and practices held by minority religions. Of course an individual’s religion is going to affect their decisions, and that is respected. However, to say that a woman’s right to choose should not exist because it does not exist in the “conscience of our people” muddies the line between allowing personal convictions to influence one’s own decisions, and projecting one’s values onto all Americans, regardless of their faith or ideology.

One of the main philosophical tenets of Hinduism is ahimsa, or non-violence. While some may use this to justify anti-abortion positions, one must not ignore the pain and suffering borne by the women who bear this difficult decision. From a dharmic perspective, making such a decision may involve considering one’s responsibilities and means in life at the moment. Is it more moral (or immoral) to have an abortion, or to bear a child that one cannot care for? With such a deeply personal and morally ambiguous issue, it does not make sense for officials to force a decision onto a mother. The karmic repercussions that follow such a procedure may exist, but it is not up to the government to make that decision and restrict a woman’s right to choose.

As a Hindu woman, it is genuinely frightening that the ability to choose and decide what is morally right for me may be restricted by Kavanaugh’s appointment. I should not fall subject to rulings pushed by the religious right that limit my agency. (It is also important to note that, according to a 2012 World Health Organization report, restricting access to abortion does not decrease abortions performed, it simply increases the amount of unsafe abortions performed.) All in all, the morality behind abortion may be contested, but the ability for a woman to make her own choice and not be subject to religiously motivated laws should be undeniable.

Debates surrounding religious freedom are gaining fervor, and it is more important now than ever to preserve the freedoms of all people of faith and none. Although this country was founded on the basis of religious freedom, there is a clear history of the systemic oppression of religious minorities. In a country that continues to grow in diversity, I can only hope that if confirmed, Brett Kavanaugh remembers this history and works to protect all Americans.