The Myth of Erasure

For more than a decade, the Hindu American Foundation (HAF) alongside several partners and other Hindu groups has been fighting to improve the way Hinduism is presented in textbooks used in California and throughout the US. The treatment of our religion is thin, distorted, and deeply at odds with how other religions are treated — something noticed not just by Hindus but by the Council on Islamic Education, as reproduced here, and by our many coalition partners in our current push to reform the frameworks. This thin,distorted, and inequitable treatment is both unique and illegal under the terms of California Statute EC 51501, which states, “The state board and any governing board shall not adopt any textbooks or other instructional materials for use in the public schools that contain any matter reflecting adversely upon persons on the basis of race or ethnicity, gender, religion, disability, nationality, or sexual orientation, or because of a characteristic listed in Section 220.”

In participating in the curriculum process and proposing edits, HAF adopted three guiding principals: accuracy of presentation, parity with other religions, and cultural competence. We wished for Hinduism to be seen as it was and is, contextualized by how its defining characteristics compared to those in other major world religions, and on its own terms and not purely through the eyes of present day sensibilities.

Unfortunately, the edits HAF suggested— here’s just the first round — have become the focus of many histrionic and mendacious rumors. Before we address some of these in greater detail, it is worth understanding the psychology that seems to animate them.

One of Hinduism’s primary characteristics is its openness to change, critique, and reflection. Individuals with a new understanding of the spiritual or material world arose, flourished, and propagated their ideas throughout the millennia of Hinduism’s existence. In the process, many critiqued the status quo to which they were regionally or civilizationally exposed. These critiques have often led reformers and their followers to maximize, for rhetorical effectiveness, differences between the reformer’s ideas and those in the environment in which they worked, however minor they may actually be.

The Sikh Coalition’s many accusations against HAF fall into this category. They are not content to merely mention Guru Nanak, revered by Sikhs and Hindus alike to this day, for his laudable social thinking and exhortation to experience God more directly; for these insights, uniquely expressed, are nonetheless in common with many of the Bhakti saints throughout the second millennium. To exalt and differentiate Sikhism, the Sikh Coalition seeks to tear down Hinduism. This is, of course, their prerogative. But it has nothing to do with history.

With the above said, here are a few of the many myths circulating about HAF’s edits.

The most recent frameworks are here (Chapter 10). The relevant sentence is:

They may have arrived in India in scattered bands, later intermarrying with populations perhaps ancestral to those who speak Dravidian languages, such as Tamil and Telugu in southern India and Sri Lanka today.

The edits HAF suggested in our most recent letter (2/29) are here. As one can see, there is no reference to Telugu or Tamil in the HAF edits, and in none of our edits did we take issue with the inclusion of these languages — both of which are mother tongues for many of our national team. This “erasure” is a myth.

Myth: HAF seeks to replace every reference to “South Asia” and replace it with “India”

As we laid out in our Aerogram piece, and as noted independently in a letter to the New York Times, South Asia is indeed the correct term in many cases, when talking of the modern-day subcontinent. But in the ancient world, that entire region was referred to as India, as evidenced by other geographic terms such as the Indian Ocean, India Ink, and so on. Christopher Columbus hunted for a path to “India” and called the indigenous people of the Americas “Indians”. Moreover, both the subcontinent (India) and the religion (Hinduism) practiced by its majority are cognates of the word Sindhu, the name those living there gave their river.

To refer to the region as “Ancient South Asia” is presentism, a bias towards seeing the past in terms of the present– in this case, modern political realities — rather than on its own terms. This fails the tests of both accuracy and cultural competence.

It is also important to note that previous versions of the draft Framework all referred to “India,” which is consistent with the Content Standards.

The edit referenced is not proposed by HAF, but by the Hindu Education Foundation. That said, we do not believe, in the interest of accuracy, that Akbar’s laudable attempt to unite Hindus and Muslims can stand in for the entirety of the period from 712 CE-1857 CE. Mahmud of Ghazni destroyed the Somnath temple; Alauddin Khilji and Malik Kaufur devastated parts of the Deccan; Aurangzeb executed Guru Tegh Bahadur; Nadir Shah sacked Delhi. The historical reality of that period, though variable, unfortunately showed Akbar to be the exception rather than the rule. Thus, focusing on Akbar would fail the test of accuracy.

Myth: Erase the word “Dalit”, and obfuscate the history of caste

HAF has never sought to obfuscate the history of caste. Again, we refer to the same edits as before — and for a longer pull quote, see here. The majority of the paragraph on caste remains, with one sentence deleted and one modified. As to the word Dalit, as noted on page 67 of HAF’s report titled Hinduism: Not Cast in Caste; Seeking an End to Caste Discrimination (itself evidence that we do not disengage with caste), HAF supports the rights of all groups to adopt their own self-definition and appellations, and as such we support individuals who wish to call themselves “Dalit” as well as those who wish to refer to themselves using other words including their specific community. However, HAF rejects the framing that the treatment of socially disadvantaged groups in India is somehow unique to Hindu society or sanctioned by core Hindu scriptures such as the Vedas and the Bhagavad Gita. To this day, Dalit communities, and the practice of caste, are found among all faith groups in South Asia. As such caste and caste-based discrimination must be taught as a social phenomenon, not as a religious one — as the frameworks stated in their previous iteration. To claim otherwise fails the tests of both accuracy and parity.

Guru Nanak, like other Bhakti saints, did challenge traditional hierarchies of all religions (his seminal statement is “na koi Hindu na koi Mussalman”, which means “there is neither a Hindu nor a Muslim,” interpreted often to mean that these labels are superficial and do not represent the deeper reality). Like other Bhakti saints, his universalist message was appreciated by Sikhs and Hindus alike. To this day, especially in India, Hindus and Sikhs both attend Temple and Gurudwara, intermarry, and celebrate common festivals like Baisakhi. Sadly, the Sikh Coalition’s shrill attempts to build up Sikhism by tearing down Hinduism — going so far as to claim that the Bhakti movement never existed — are ahistorical, lacking in perspective, and culturally incompetent. The edits HAF proposed, as noted here, merely seek to positively present Guru Nanak’s contributions without doing so specifically at the expense of Hinduism. Moreover, HAF has submitted edits highlighting Hindu, Sikh, and Muslim cooperation in California, including the Ghadar Party in the early 20th century, and in the greater sphere of its activities, routinely works in multi-ethnic, multifaith coalitions.

We hope the above clarifications will provide the interested, unbiased observer a basis for evaluating the deluge of accusations leveled against HAF. We are surprised that the simple attempt to improve the teaching of Hinduism on the axes of accuracy, parity, and cultural competence–none of it at the expense of any other religious group–could lead to such intense and hyperbolic attacks. We hope this debate can be brought out of the realm of fact-free identity politics and into the realm of rationality and civility, where it belongs. 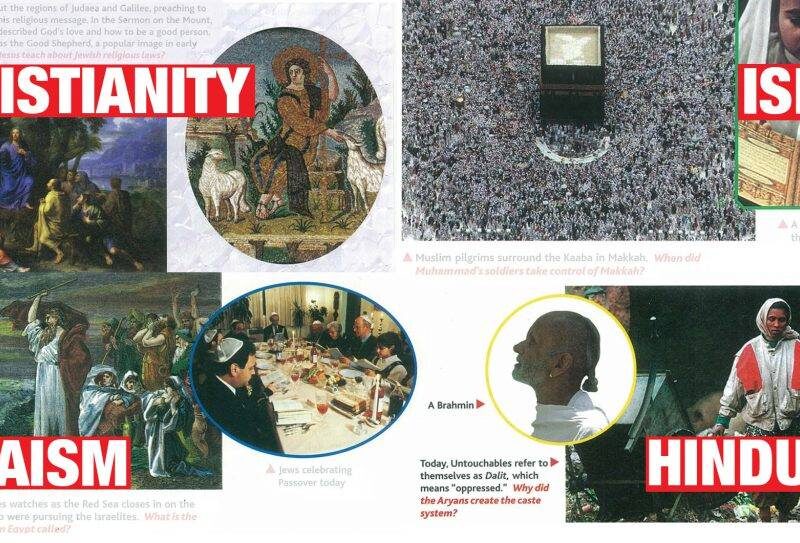 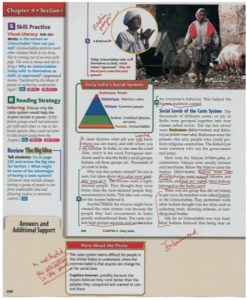