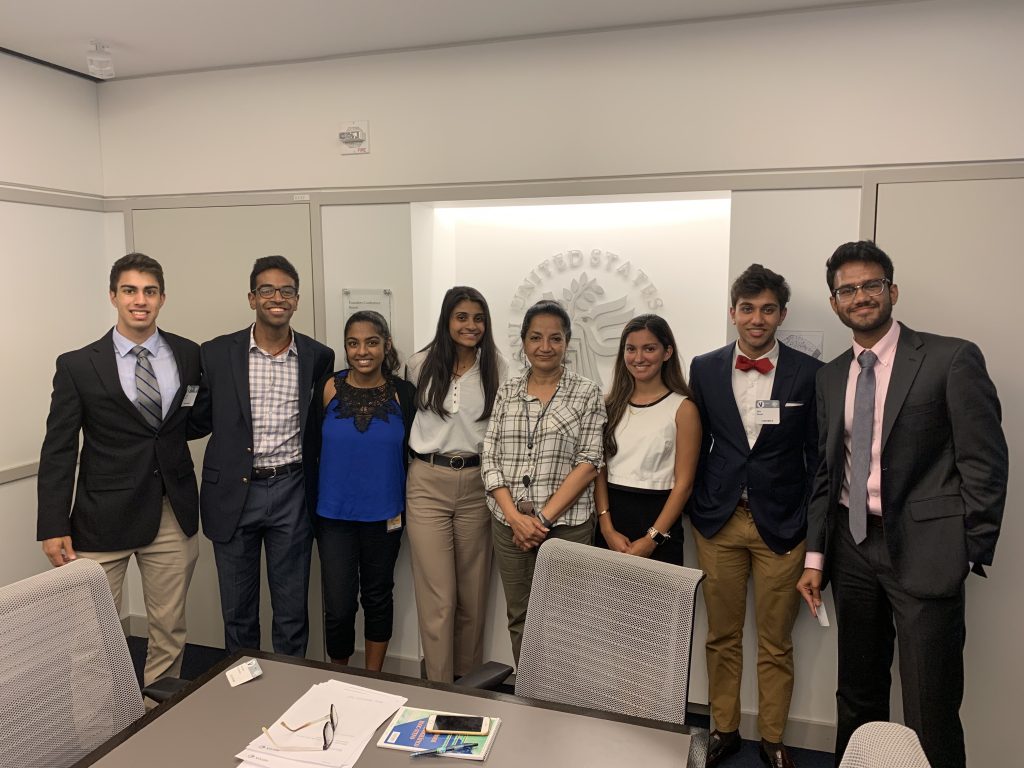 The following is a guest blog by Kali Luthra, one of HAF’s 2019 Summer Interns.

As part of the Hindu American Foundation (HAF) 2019 Summer Internship, the HAF interns had the amazing opportunity to meet and speak with Dr. Tara Kartha, a distinguished fellow at the Institute of Peace and Conflict Research in New Delhi, India who is currently in Washington, DC as a Jennings Randolph Senior Fellow at the U.S. Institute of Peace (USIP).

Dr. Kartha along with Jalil Jilani, former Ambassador of Pakistan to the U.S., are crafting a high-profile document that will inform regional and U.S. leaders on the way forward in the decades-long conflict between the two countries and provide a template for future engagement on the issue by the USIP Asia Center and the Institute overall.

Her current assignment, previous tenure as the Director of the National Security Council for the Government of India (2000-2017), and more than 30 years of experience in national security policy making and security analyses made her one of the most interesting people I have met thus far as part of the HAF Summer Internship program.

I became interested in HAF because I wanted to be more comfortable with my Hindu identity in the United States. Over the last few years I have interned at places such as the U.S. Department of Commerce, Office of Rep. Ed Royce (R-CA) former Chairman of the House Foreign Affairs Committee, the Kurdistan Regional Government, and now at the Embassy of India thanks to HAF.

One of the realizations I came to was the fact that while I have been working as an American, I was not taking my Hindu identity into perspective. Additionally, as an aspiring diplomat, it is very important to me to represent my identity and the privilege that I had growing up in an open, democratic nation being a Hindu American.

When HAF presented us with the opportunity to meet Dr. Kartha, I was especially excited because she is everything that I aspire to become.

Her dedication to her work and the issues she has taken on, all while being a Hindu working in the United States, is truly inspiring. It was also amazing to meet someone who is working on issues that are extremely relevant to the national security of India as well as the foreign policy of the United States.

While listening to her, I found it particularly interesting to learn about her dedication to work with similar individuals from Pakistan to come up with a joint report on the ongoing conflict between India and Pakistan. Her drive to maintain impartial and search for the best possible peaceful outcome to this conflict is very admirable and everything that I hope to learn. I am incredibly grateful to HAF for cultivating and building my interest in being an aspiring Hindu American diplomat.

Kali Luthra, originally from Atlanta, Georgia, is a Junior at American University in Washington, D.C. where she is majoring in International Relations with a minor in Economics.